When a local boy went missing, volunteer rescuers in Libby, Montana, leapt into action. Unfortunately, their radios—stymied by the area's challenging terrain did not—and the team struggled to communicate. Not anymore, though.

In early June, Lincoln County Sheriff Darren Short put out a call that shook the people of northwest Montana: A four-year-old boy had gone missing near Bull Lake, about 15 miles southwest of Libby. He’d last been seen playing in his backyard, but his parents couldn’t say what color clothes he’d been wearing, whether he had a coat on, or what direction he may have wandered. As evening temperatures plunged into the 40s, search and rescue crews sprang into action. Teams from all over Montana, as well as from Idaho and Washington, fanned out with boats, helicopters, and ATVs supporting the effort.

One team that answered the call was David Thompson Search and Rescue (DTSAR), a volunteer group that responds to dozens of incidents each year in and around Libby. When DTSAR volunteers were deployed in June, they encountered a problem that had plagued them in the past: The landscape around Libby is rugged and interferes with the signals of their aging, short-distance radios, which are not all the same brand or style. When they searched for the missing boy, they encountered particularly steep terrain and dense forest around Bull Lake—a difficult situation that was only compounded by thunderstorms and fog. Because the DTSAR team had only had a dozen radios in total, many of their more than 40 volunteers weren’t able to communicate with the rest of the team.

Fortunately, the search ended happily after two days when a family who lived nearly three miles from where the boy vanished found him hiding in their shed. He’d reportedly crawled into a lawn mower bag to stay warm. While the search and rescue teams celebrated the small miracle, DTSAR volunteers also began grappling with the reality of their technological limitations. “It really opened our eyes that we need to take a step up,” says Jon Obst, president of DTSAR. 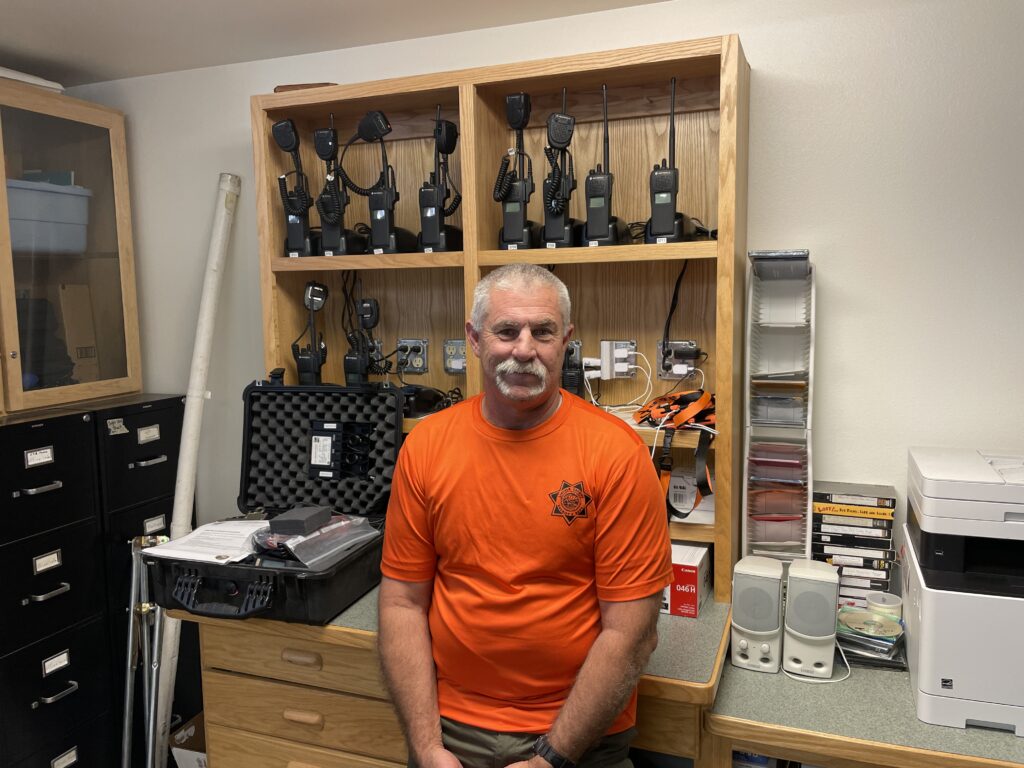 Jon Obst, president of DTSAR, poses at the crew's headquarters with the team's old radios. Photo by Jay Bouchard

When Obst, who works full-time as a Lincoln County game warden, brought the issue to the attention of the Sheriff’s office, Short introduced him to Tabitha Viergutz, a Libby local who, in April, was hired as the LOR Foundation’s Libby community officer and had been listening to community members to better understand community needs and priorities that LOR might be able to help with. When Viergutz met with Obst and learned about the challenges with the radios, a solution emerged.

“We don’t need the Cadillac of radios,” Obst noted during his first meeting with Viergutz. What they needed was something reliable, something volunteers could easily use, and they needed more than a dozen—all of which would need to operate on the same frequency. The LOR Foundation provided a $28,000 grant allowing DTSAR to purchase 25 Icom two-way radios—enough for each two-person team to carry at least one—and five mobile repeaters, which were installed in DTSAR’s rescue vehicles and can boost radio signal across dozens of miles. While DTSAR receives some support in the way of tax reimbursement, it wouldn’t be enough to support the purchase of radios like these.

The grant marked LOR’s first in Libby, and it was one close to Viergutz’ heart. “This opportunity emerged as a priority because of collaborative efforts to find a lost little boy,” she says. “It’s inspiring to see the community come together like this.”

In the months to come, the DTSAR team will be training with the new technology, ensuring each person knows how to work the radios and repeaters in the field. They’ll also be raising money to better support the growing number of volunteers—which may include purchasing a new boat or vehicles. The goal, Obst says, is to be fully prepared when the next call comes in—because good communication among rescuers could well be the difference for the next little boy lost in the wilderness.

If you’re interested in supporting David Thompson Search and Rescue by volunteering or via donation, visit DTSAR.org for more information.

Reach out to connect on important matters for your community or your organization.

In the nearly 12 years since Tabitha has called Libby home, she's worn a lot of hats—tutor, tour guide, volunteer to name just a few. The common thread among them? Tabitha's passion for listening, learning, and sharing information with her… Meet Tabitha

Physical education teachers at Lander Middle School are designing a curriculum that gives kids free access to mountain bikes. To make that happen, they needed bikes—and they turned to the LOR Foundation for help. Read more

Montezuma County launched its Community Intervention Program to better respond to noncriminal 911 calls. But in order to get the innovative program running, they needed radios to communicate with dispatch—that's where LOR came in. Read more

The new community garden's 11 plots, supported with funding from LOR, will be ready for planting this spring. Read more

By using use this site or clicking "I Agree," you agree that LOR and our partners may use cookies and some personal data for personalization and analytics. Read our Privacy Policy.